Yorkshire Comedian,Johnnie Casson has become a legend amongst comedians the length & breadth of Britain and has found a popularity envied by many bigger name performers.

A unique style of delivery, some clever material and an exceptional warmth, this dynamic and genuinely funny Yorkshire man, with the “mixed-up metaphors”, has a very natural asset - “like-ability”, illustrated within minutes of him commencing his original blend of comedy when smiles and titters soon turn to uncontrollable laughter.

From your first encounter with JOHNNIE CASSON you soon realise he not only tells funny stories, based on his situations in life, he is a genuine funny man with a natural asset, "like-ability". Johnnie has appeared on five ITV Des O'Connor Shows, two shows for ITV from the London Palladium, with Bruce Forsyth, many guest spots on Game Shows, Chat shows and appearances on many entertainment shows for all major television channels, including his own half hour show on Sky One.

Johnnie Casson hails from Halifax, West Yorkshire, now "living in Brighouse for tax reasons," as he will tell you. He commenced his showbiz career as drummer with "The Cresters", one of the country's favourite comedy show groups. It wasn't long before Johnnie took over the lead comic role, a role to which he was perfectly suited and one to which he was committed for the 21 years with the band. As well as touring with The Beatles, the band topped the bill in the then thriving cabaret clubs and found success on many television shows such as "Cliff Richard & Friends".

Bruce Forsyth said “Johnnie Casson is so funny he could become an enemy”. 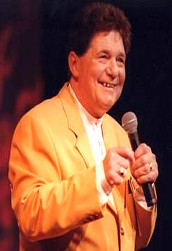