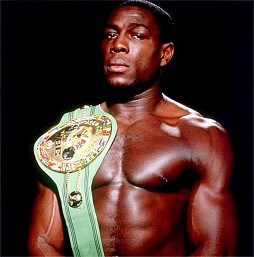 His well documented illness put Frank back in the public eye and the warmth and reception Frank now gets wherever he goes has propelled him back into being one of Britain's most loved sports personalities.

Frank is now well and able to work on a variety of different jobs including a Q&A speech which is informative as well as amusing.

1989: Experiences second world title defeat, for the undisputed world heavyweight championship, at the hands of Mike Tyson in Las Vegas.

1996: 16th March - Loses his title in first defence against former undisputed champion Mike Tyson in Las Vegas. He suffers a cut eye in the opening round. Referee forced to stop fight in third as Bruno crumbles under a flurry of punches.

What's Frank been doing since retiring?

Frank is well and working all over Europe he has recently been invited on a number of corporate day golf events and more and more events as an after dinner speaker. His presentation is used by companies as a motivational speaker

Is he a motivational inspirational speaker? Yes.

Is he a motivational keynote speaker? Perhaps not.

He is used by many clients for charity fundraising events as the public love him and children recognise him. One recent charity fund raising idea was to auction his time in a Gym with a couple of charity supporters. His autograph is always in high demand and he often attends autograph shows with Geoff Hurst, Peter Shilton, and other celebs and has done a series of events with Ricky Hatton. He enjoys football and is just getting into Rugby Union as his son now is playing. He is a legend of the sport and apart from Boxing the World loves the character of Frank Bruno.