Stephen Collins, more commonly known as Steve Collins, (21 July 1964 in Cabra, Dublin, Ireland) and a former professional boxer who fought under the nickname “the Celtic Warrior” and became the WBO World middleweight and super middleweight champion.

Collins is linked with an era when there was a great rivalry between British boxers Chris Eubank and Nigel Benn. He fought and beat both.

Collins began his professional career as a lower level fighter in America and lost three World title fights on points. It was not until Collins reached his 30s that he fulfilled his potential, becoming the WBO middleweight champion and later the WBO super middleweight champion.

He is the brother of former footballer and manager Roddy Collins.

Collins won 26 Irish titles at middleweight, light-heavyweight and cruiserweight as an amateur before turning professional in Massachusetts, U.S. in 1986. His debut fight was against Julio Mercado on the undercard of a bill that featured his future trainer Freddie Roach and the future Fight of the Year winner Micky Ward. Collin’s beat Mercado by way of knockout in the third round.

In Boston, Massachusetts in 1988, he defeated Sam Storey to win the Irish middleweight title, then defeated world #5, Kevin Watts, and won 16 successive fights before Mike McCallum outpointed him over 12 rounds in the WBA world middleweight title fight in Boston in 1990.

In 1992, he lost at the same weight to Reggie Johnson and to Sumbu Kalumbay in the EBU decider, before beating Gerhard Botes of South Africa to win the WBC Penta Continental title in 1993.

Collins then based himself in England where he joined Barry Hearn’s Matchroom Boxing. Alongside him was Paul “Silky” Jones, his sparring partner and good friend who later went on to become WBO champion but in the light middle weight division. Steve was trained by Freddie King in the Romford training camp.

In 1994 he defeated Chris Pyatt to secure the WBO middleweight belt. The following year he relinquished this title without a defence, moving up to super-middleweight and defeating the previously unbeaten Chris Eubank in Millstreet, Cork, Ireland to win the WBO title.

Collins took on Eubank in confident style with the first fight being won by Collins which Eubank said Collins played mind games. Collins had enlisted the help of well known guru Tony Quinn and they led the press to believe Collins would be hypnotised for the fight. True to form Collins sat in his corner and did not move, listening to headphones during Eubanks ring entrance. The second fight was a thriller with Collins coming in looking to take the head off of Eubank. He tried so hard to he nearly fell out of the ring. Most of the rounds were owned by Collins but the last three rounds Eubank came storming back doing the same as Collins in the first few rounds. But Collins held him off winning by a well deserved spilt decision. Collins was known as a true World Champion after beating Chris Eubank.

He defended this title successfully seven times (including a second meeting with Eubank and two fights against Nigel Benn).

Always one for a bit of a laugh, Collins said to The Sun newspaper in the buildup to the first Benn fight that he had been approached by ReadyMix concrete as they were interested in sponsoring his chin.
In the Craig Cummings fight in 1997, at Glasgow’s Kelvin Hall, Collins was knocked down in the first 15 seconds of the fight (the third knock down in his professional career). Collins climbed off the floor to insist it was a slip but with a cheeky grin at Cummings took the standing eight count. A total demolition of Cummings ensued and in the third round the referee stopped the fight with a very relieved Cummings leaning back on the ropes looking towards the sky. This turned out to be Collins’ last professional appearance as he announced his retirement shortly after the fight.

Collins had said some years before that before retirement he would like to fight at Celtic’s home ground. However, Collins was billed to fight Joe Calzaghe and then at a late stage withdrew because of injury, had his title stripped, and then retired. Chris Eubank stepped in to take Steve’s place in fighting Calzaghe, but for the then vacant WBO title.

Collins reportedly stated in the press that he had no motivation left as he had spent the best part of his career chasing Roy Jones Jr. for a unification fight that had been promised to him many times. A fight with Calzaghe would do nothing to satisfy the desire he had for fighting Jones. He then added he wanted to retire on a high note with a good pay day, “Joe is a good up-and-coming kid, but he wouldn’t fill a parish church”.

In 1999, he announced his decision to come out of retirement in order to fight Roy Jones Jr. Jones is said to have offered in excess of £3 million for the fight. Collins is said to have been suspicious regarding the money that Jones was offering and said to the papers that “for £3 million I would fight Mike Tyson”; this only spurred the spin doctors to assume it was a challenge at Iron Mike.

Controversy surrounded the fight as it was rumoured that Collins would have to fight Calzaghe first before a showdown with Jones. Collins had accepted this and started to prepare to fight Calzaghe. In his preparation training for the fight that was never to be, Collins collapsed during sparring. When doctors told him that blows to the head could result in his death, he retired for a second time.

He is reported to have stated in Boxing World that he has spent so long chasing Roy Jones Jr that money was not an important factor any more and that he would “fight him in a phone box in front of two men and a dog”.

Collins retired with his then wife and children to the town of Bangor, County Down, with a record of: W 36 (21 KOs) – L 3.
Retirement

Steve has not entirely faded from the spotlight since his retirement. In 1998 he appeared in the film Lock, Stock and Two Smoking Barrels (directed by Guy Ritchie) as a boxing gym bouncer.
In 1999, he made a cameo appearance in U2s video for “Sweetest Thing.”

Collins featured in the British TV reality show Commando VIP that aired on Five. It put six celebrities through tough military-style challenges after being trained by three real commandos. He appeared alongside fellow ex-boxer Nigel Benn. 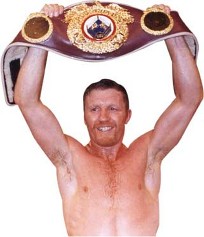 To book Steve Collins as an after dinner speaker for your boxing event or as a celebrity guest speaker or sports speaker, or even a presenter contact us on 01524 733310 or contact us online