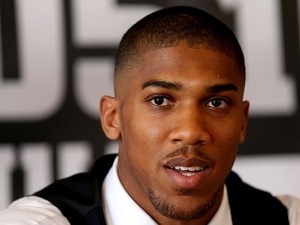 At the London 2012 Olympic Games a sporting star was born, as Anthony Joshua MBE emerged as one of the best young boxers in Great Britain. After dominating his event and walking away with Gold in the Super Heavyweight category, Anthony has been catapulted into the limelight. A wonderful olympic speaker, Anthony talks of his times in the ring as well as the demands of being an elite sportsman.

Preceding the 2012 Olympic Games, Joshua was relatively new to the world of boxing, entering the sport just five years previous at the age of 18years in 2007. It wasn’t until 2011 that Joshua left his mark in the boxing ring with a knock out performance at the World Amateur Boxing Championships in Azerbaijan, picking up a silver medal after defeating the reigning World and Olympic champion, Roberto Cammarelle. Now a Decorated World Champion after defeating Charles Martin and Wladimir Klitschko

As a sign of recognition Anthony’s phenomenal success he was awarded the prestigious MBE in 2013 for his services to boxing. Now acknowledged as the top super heavyweight boxer in the World. An eloquent and intriguing after dinner speaker, Anthony engages and compels guests to achieve peak performance in their own lives.

With incredible talent and inspirational determination, Anthony is the ideal candidate as a motivational speaker, Olympic speaker or after dinner speaker. Anthony’s experience as a highly successful Olympian translates sinuously into his accomplished after dinner speeches. His inspirational and motivational delivery of speeches can be adapted to suit any clients brief and Anthony’s powerful personality enables him to engage a crowded room with ease. Full of charisma and charm this gritty boxing star has all the attributes required to turn your event into a guaranteed success

To book Anthony Joshua MBE as an Olympic speaker or after dinner speaker,contact us on 01524 733310 or contact us online