Ricky Hatton is quiet, respectful and unassuming out of the ring but the Mancunian is transformed once he crosses the ropes. Hatton's trainer Billy Graham says: "Ricky's always telling jokes, but in the ring he's cold, merciless and an awful man." It is those qualities, as well as considerable skill, which have made Hatton one of the biggest attractions in British boxing.

Hatton signalled his professional intent in February 1999, halting Tommy Peacock in two rounds to claim the vacant Central Area title. Then, in a British title bout, he showed he could battle and won a classic fight against Jon Thaxton on points despite being cut after 15 seconds of the first round. It took just five rounds on 26 March, 2001 for Hatton to emphatically defeat Tony Pep and win the lightly-regarded WBU title. That performance confirmed the "Hitman's" reputation as one of the most ferocious fighters around as he sent his opponent to the canvas three times.

But he had to wait a long time to get the chance to prove his pedigree against legend Kostya Tszyu. Appropriately fighting in front of his adoring fans in Manchester, Hatton showed no fear, going after the Australian champion from the start. He showed endurance - as well as power and heart - in the opening rounds and then dominated Tszyu - a recent pound-for-pound greats - forcing him to quit on his stool after round 11. A world of opportunities has truly opened up for Hatton and it will only be a matter of time before we will see just how good he can be. 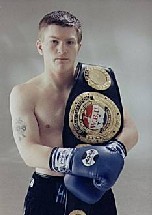 To book Rick Hatton as an after dinner speaker for your boxing event or as a celebrity guest speaker or sports speaker, or even a presenter contact us on 01524 733310 or contact us online