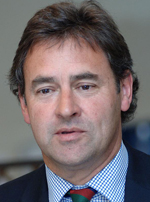 Chris Cowdrey and his father Lord (Colin) Cowdrey were only the second father and son to captain the England cricket team. He was a regular broadcaster with BBC and Sky Television before joining TalkSport Radio as the lead cricket presenter. With his background in broadcast and cricket, Chris is an in demand after dinner and keynote speaker, as well as an excellent awards host.

Former English cricketer, Chris Cowdrey and his father Colin were the second father and son to have both captained the England cricket team. He was a regular broadcaster with BBC and Sky Television before joining TalkSport Radio as the lead cricket presenter. Now in high demand as an after-dinner speaker, he entertains audiences with tales of his time on the England squad.

Following in his father’s footsteps, Chris joined the Kent and England teams, and Captained the Kent team for six years from 1985. With his brother Graham also playing professional cricket there was a Cowdrey on the Kent team sheet for 48 consecutive years. In 1988, Chris was appointed England Captain against West Indies.

"A charming and lovely bloke and a funny and gentle speech entirely appropriate to the audience. He was also excellent company for those who sat with him through lunch - a very happy client"
Trailblazers UK Ltd

He was a regular broadcaster with BBC and Sky Television before joining TalkSport Radio as the lead cricket presenter. Speaking at a wide-range of corporate events, Chris’s natural humour and library of sporting tales makes him a sought after dinner speaker.

Chris was the Founder and Chief Executive of a successful fundraising business. The company were the market leaders and he was previously responsible for the Marketing and PR which produced an average of 126 events a year.

As the President of Lord’s Taverners for from 2007-2011, Chris was a major asset as a Charity fundraiser, where he worked closely with the events team and as an adviser to the Commercial Committee.

Highly experienced in both the charity and corporate sector, Chris delights all kinds of audiences with his after-dinner speaking.

A great choice as a sports speaker.

To book Chris Cowdrey as a keynote speaker, after dinner speaker, cricket speaker, event or conference host Call 01524 733310 or contact us online.