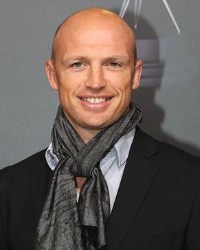 He went on to make his full international debut for England in December 1995, against Western Samoa.

Dawson was a member of the 1997 British Lions tour to South Africa, and the 2001 tour to Australia.

Matt Dawson became an integral part of the England side, and during the 2000 Six Nations tournament was named captain.

He won his 50th cap against Ireland on the same day England won the Grand Slam in 2003.

He was a crucial part of the team that won the 2003 Six Nations Grand Slam and World Cup, feeding the ball to Jonny Wilkinson for his legendary drop goal.

In 2004, he moved from Northampton to Wasps, winning the Premiership title in his first season.

In 2004, Matt joined ‘A Question of Sport’, featuring as a team captain opposite Ally McCoist and now Phil Tufnell.

Dawson was a key member of the 2005 Six Nations Team, and was included in the 2005 British Lions tour to New Zealand.

In May 2006, Matt retired from the sport playing his last game against Sale.

Matt Dawson won 77 caps for his country in total, including nine as captain. He is England’s most capped scrum half.

In 2006 he took part in the BBC’s Celebrity MasterChef and won.

As a rugby reporter, he has worked on BBC Sport’s rugby fixtures and as contributor to their coverage of the Six Nations Championship and on BT Sport with regular appearances on the channel’s Rugby Tonight,

Matt was also a commentator for BBC Radio 5 Live throughout the 2015 Rugby World Cup.

His intelligence and charisma guarantees him as a natural choice for after-dinner speeches and motivational presentations.

As a motivational speaker, Matt Dawson offers insight into the foundations of a winning team with key transferable skills for the business world.

Matt Dawson is available as

To book Matt Dawson for an event or conference or hire an after dinner speaker with Laughter UK Call 01524 733310 or contact us online.