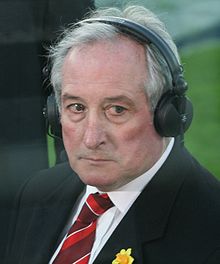 Gareth is renowned as a giant of Welsh rugby, reaching his zenith in the days when the national side won three grand slams and five triple crowns. He has been described by the BBC as "arguably the greatest player ever to don a Welsh jersey", and in a poll of international rugby players conducted in 2003 by Rugby World magazine, Gareth was declared the greatest player of all time. He gained a CBE in 2007 for his services to the sport.

Born a miner’s son in the village of Gwaun-Cae-Gurwen, near Port Talbot, Gareth earned his first appearance for Wales at the age of just 19 and had his 21st Birthday whilst on his first Lions Tour to South Africa. He was a key presence in that glorious run and earned 53 caps between 1967 and 1978, with 13 appearances as Captain, marking him as one of Welsh Rugby’s true legends.

Gareth's long successful international career came to an end in March 1978 in the same way as he had started his career - against France in the Five Nations Championship, celebrating with a 16-7 winning finish in front of a home crowd at the Arms Park in Cardiff. To crown his achievements he was named Rothmans Player of the Year 1978. After retiring, Gareth was a team captain for four years on the BBC TV quiz show A Question Of Sport, along with Liverpool and England footballer Emlyn Hughes.

Gareth has always been determined and dedicated, but has also been mindful that success requires a team effort, whether it is in sports or in business. To quote Gareth "Success on the rugby field, as in life, comes when everybody is pulling together." Drawing on his experience of having played for Wales and for the Lions, Gareth delivers Motivational Speeches that inspire and fascinate audiences, with positive messages learnt on the Rugby pitch that he applies to the working and personal lives of delegates - and all done in a highly entertaining and captivating manner.

Gareth is also a first rate After-dinner Speaker, with anecdotes that draw on his wealth of experience in rugby and his keen interest in fishing. He never runs short of tales to tell - including setting a British angling record when he landed a pike weighing 45 lb 6 oz! - and will happily engage in question and answer sessions that are always entertaining and amusing, talking about his inspirational career and personal or professional achievements.

Gareth Edwards is available as

To book Gareth Edwards for an event or conference or hire an after dinner speaker with Laughter UK Call 01524 733310 or contact us online.