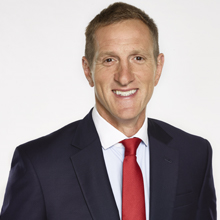 Starting out in team rugby, Will Greenwood had his national debut in 1997. He cemented his position as an England regular in the 2000/01 season under legendary coach Sir Clive Woodward, and would go on to receive many accolades, including many man-of-the-match performances. He became joint top scorer when England won the World Cup in 2003.

During his 11 years at the top, Will Greenwood faced multiple injuries, personal tragedy, and the occasional self-doubt. His remarkable ability to persevere reveals the extent of his focus and determination to remain among the best – nationally and internationally. This attitude has remained with him off the pitch, where he is a regular match day presenter for Sky. He works with several non-profit organizations, and fronts the popular “School of Hard Knocks,” a social inclusion charity that works with at-risk young people. He is patron of the Child Bereavement Charity and an ambassador for the 2015 Rugby World Cup in England.

He is a successful entrepreneur and owns SuperSkills Experiences, a company which provides family holiday experiences, facilitates corporate events, and runs SportFest, an annual family sporting event. His latest venture ‘Sport Show’ will see representatives from a huge array of sports come together for a 3 day annual event, aimed at offering the opportunity for children of all ages to experience new sports and be inspired to lead a healthy and active lifestyle.

With a reputation as a bright, articulate, and entertaining personality, Will Greenwood delivers intelligent and insightful keynotes that can shed light on the more serious lessons learnt from a career in elite sport, as well the synergies between high performance in sport and business.

Will Greenwood is available as

To book Will Greenwood for an event or conference or hire an after dinner speaker with Laughter UK Call 01524 733310 or contact us online.