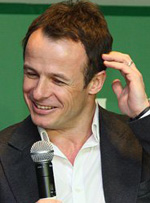 In his eleven seasons with the club, Healey has played virtually every position behind the scrum.

He has tasted success in domestic as well as European competitions being in the squad that won four consecutive Premiership titles (1999 to 2002), also collecting a Pilkington Cup winners medal (1997) and Zurich Championship medal (2001).

Educated at St Anselm’s College, Birkenhead and at Leeds Metropolitan University, Austin Healey represented England at U21 and A level as well as England Sevens.

After moving to Leicester he made his senior England debut in Ireland in 1997 and was chosen for the British Lions tour to South Africa later that year.

Austin Healey has represented England in 5 Five/Six Nations tournaments (1997-2002) and was a key figure in the 1999 World Cup.

He was very unlucky to miss the final cut when the 30-man England squad for the 2003 World Cup was announced. A non-travelling reserve, Healey made the trip ‘Down Under’ mid-tournament as cover at scrum-half, but returned to his club when he was not called on to play.

In the 05/06 season Healey was handed club vice-captaincy and regularly captained the team from scrum half and fly half during the international period.

In 2000 Austin Healey was voted both Leicester Tigers’ and Allied Dunbar’s Player of the Season and was later nominated by Tigers Members’ as recipient of the Outstanding Service Award for his contribution to the club.

Since retiring from playing rugby, Austin has worked as a successful banker for Credit Suisse and has been a popular pundit and commentator for the BBC and Sky.

In 2008, Austin partnered with Erin Boag on Strictly Come Dancing.

In the spring of 2013, Austin was announced as a presenter on BT Sport alongside Ben Kay, Lawrence Dallaglio, Martin Bayfield and Sarra Elgan.

He has fronted coverage of their Aviva Premiership, Top 14, & Premiership 7’s matches as well as being one of the regular hosts of Rugby Tonight – widely acclaimed as the best sporting highlights show on TV.

Austin Healey is available as

To book Austin Healey for an event or conference or hire an after dinner speaker with Laughter UK Call 01524 733310 or contact us online.