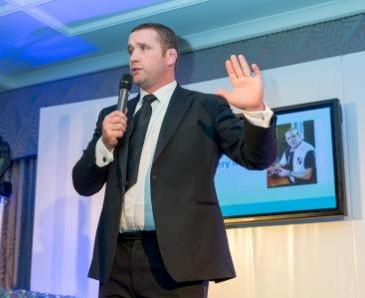 Phil Vickery MBE is seen as one of the legends of the game of Rugby Union. Capped 73 times for his country, and twice a British & Irish Lion, he also captained England at the 2007 World Cup and was part of the historic team that lifted the Webb Ellis trophy in 2003. Although retired from the game he is still actively involved through coaching and commentating. His views are regularly sought by the media and he writes regular columns for the national press.

Phil’s profile extends well beyond rugby with high profile appointments such as ambassador to the Prince of Wales’ Countryside Trust, work with Wooden Spoon and promotional work with global brand McDonalds. In 2011 Phil won the hugely popular BBC TV cooking show Celebrity MasterChef which exposed him to a new audience of over 4 million. Phil is in high demand as an after dinner speaker.

The Raging Bull story began back in 2003 when Phil started a company to manufacture playing kits for rugby clubs. Phil chose the name Raging Bull for his emerging company based on the nickname he acquired whilst rampaging around the pitch. The company logo was obvious at this point and the iconic bull symbol made its first appearance.

Phil Vickery is available as

To book Phil Vickery for an event or conference or hire an after dinner speaker with Laughter UK Call 01524 733310 or contact us online.